1. Location of the West-Khazret area in the Ural gold ore zone

2. Brief description of the internal structure of ore bodies in the oxidized part of the deposits of the Atygai group 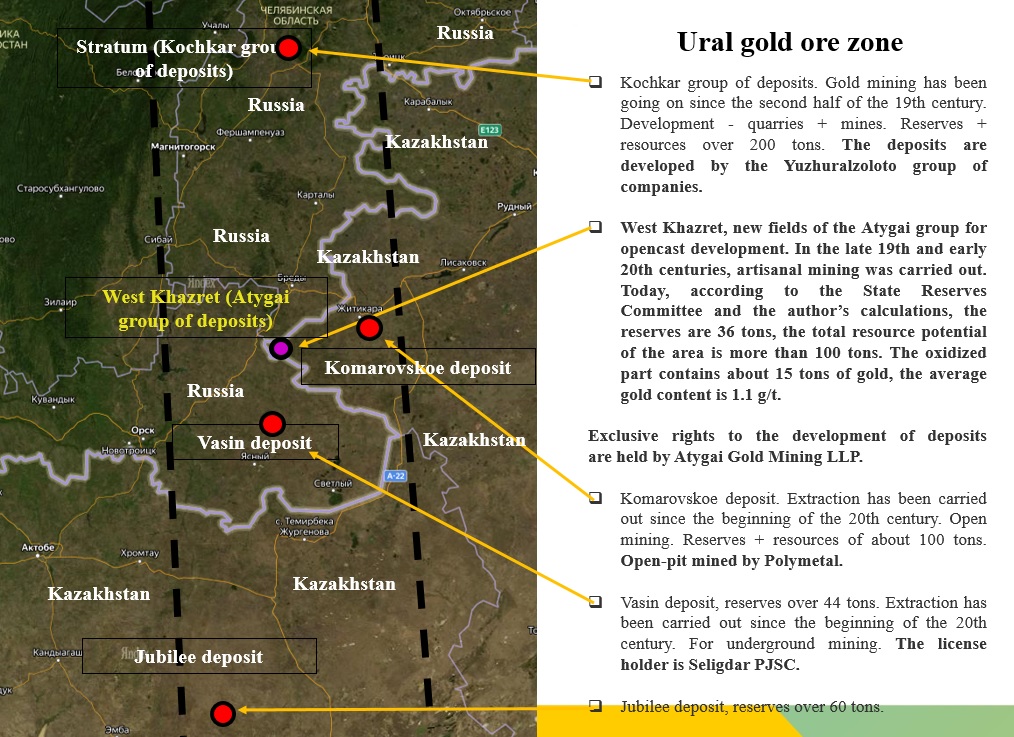 Exploration and technological research 2015-2021 showed that the ores in the upper part (oxidized part up to 80-100m) of the deposits of the Atygai group are represented by:

1. Gold-bearing clayey weathering crusts with a gold grade of about 1 g/t, such ores are about 80% of the total mass of ore.

2. Partially destroyed quartz lenses, veins with a high gold content of 3.5-16.5-51.9 g/t. There are about 20% of such ores in the deposits of the Atygai group of the total mass.

The original geological allotment area of the contract was 320 km2. Exploration strategy in 2015-2020 was the rough delineation of ore bodies along a sparse network (100m between profiles and 50m between wells). This made it possible to localize almost all the deposits of the area and put part of their reserves on the balance sheet in the State Reserves Committee of the Republic of Kazakhstan.

Due to the large area of work, a complex of geological exploration and significant investments in the project were required. From the stage of general exploration to the identification of independent deposits, the shareholders have invested about $20 million.

A sparse exploration network did not allow to identify a significant number of lenses and veins with a high gold content and to include them in reserves at this stage. This significantly reduced the gold grade and reserves in the total ore mass.

In addition, the methodology for calculating reserves by the State Commission for Reserves excluded samples with outstanding grades and did not allow the inclusion of high-grade ores in the reserves.

Earlier, the deposits of the Atygai group were not developed industrially. But along the entire strike of the ore zones (more than 17 km), artisanal workings were discovered (late 19th, early 20th centuries), which are another fact of the presence of ore bodies with high gold contents.

When carrying out exploration and mining operations, we expect an improvement in the quality of ore and the volume of gold in the same volume of ore.